We'll use this diagram for our discussions: 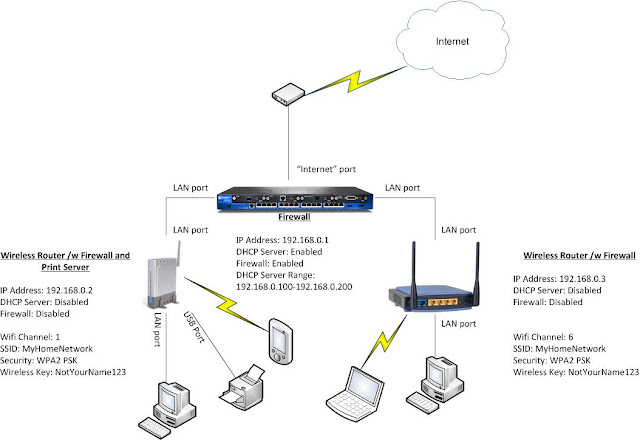 First, setup each wireless router with a different IP address on that same network.  If you're new to networking, then stick with something simple like in the diagram.  The first router would be 192.168.0.1, then second will be 192.168.0.2, and so on...

Third, each wireless router must use the same wireless security settings. The whole point of this is so you don't lose your wireless connection as you wander around the house.  If you have different security settings, you need separate SSIDs and you'd be dropping your connection all the time when you move around.  So make sure your security mode, algorithms, keys, key renewals, and beacon settings are all the same, whatever they might be.  (I recommend WPA2 with AES)

Fourth, only one routers should run DHCP.  I recommend the router that is connected to your Internet connection for this function.  The Dynamic Host Configuration Protocol is used to give unique IP addresses to your various devices.  If you have multiple DHCP servers and you don't set them up properly then you can end up with IP address conflicts or dropped connections as you move around the house.  When setting up DHCP, make sure to set a range that doesn't overlap with any of the router IP addresses you set from the first step.  Use a range like 192.168.0.100 to 192.168.0.200 should avoid any problems.

Fifth, there should only be one firewall.  The only firewall you should have on your network is the one that connects to the Internet connection.  If you can, I recommend disabling the firewalls on all the other routers.  While the last step will ensure there are no problems if you can't turn off all the firewalls, it's better if you do.

Lastly, only your router that connects to the Internet should have its "Internet" or "WAN" port connected to anything.  For any of the other routers, don't plug anything into the Internet ports.  When you connect your routers together, always use the "LAN" ports.  This keeps them all on the same network and prevents any firewalls from interfering with communications between your local devices.  You will still have the one firewall you setup in step five to protect you from anything on the Internet.

Posted by thepacketmaster at 1:51 PM

thepacketmaster
I've worked in the IT industry for 18 years as a sys admin and network/security admin (and a few other things). Solaris, Linux, and Windows administration; Cisco and Juniper network implementation and design; security analyst; BASIC, C, Assembler, Perl, PHP, COBOL programmer; database admin; backup admin... If it involves a computer, I've probably done it. Creator of TPM Linux